High extraversion was linked to a decrease in alcohol consumption

A recent study from the University of Jyväskylä shows that among middle-aged women depressive symptoms increased and eating became more irregular but alcohol consumption remained unchanged during the emergency conditions in spring 2020. The COVID-19 pandemic affected people in different ways, with some experiencing their lifestyles becoming healthier and some unhealthier. Personality was found to play a role in these changes. 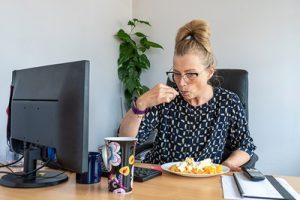 The COVID-19 pandemic has impacted everyday life for a year and a half. Two recent studies examined changes in the health behaviors and depressive symptoms of middle-aged Finns as well as the role of personality in these changes.

In the first study, middle-aged women’s health behaviors and depressive symptoms were examined before the pandemic as well as at the onset and at the end of the COVID-19 emergency conditions in Finland (March–June 2020). Middle-aged women reported more depressive symptoms and more irregular eating habits at the end of the emergency conditions than before the pandemic. On the other hand, no changes in alcohol use and leisure time physical activity were observed.

“We found these adverse changes to accumulate partly for the same people,” postdoctoral researcher Tiia Kekäläinen from the Faculty of Sport and Health Sciences, University of Jyväskylä, says. “For example, in women who had unhealthier changes in eating habits, depressive symptoms and alcohol use also increased.”

Personality plays a role in adaption to a pandemic situation

Both studies also looked at the role of personality traits in adaption to the pandemic situation. More extroverted women reported decreased alcohol use and healthier changes in their eating habits than did less extroverted women. Women with high scores in neuroticism reported both healthier and unhealthier changes in their eating habits.

“Avoiding social contacts was strongly recommended during the emergency conditions and, for example, restaurants were partially closed,” Kekäläinen says. “The decrease in meeting friends and eating out may explain the change to healthier eating habits and lower alcohol use among extroverted women.

“Neuroticism is characterized by negative effects such as anxiety and a susceptibility to stress. During the pandemic, such characteristics may have caused unhealthy habits such as emotional eating, or, conversely, careful following of a diet.”

“The activity facet reflects a tendency to live a busy life with a rapid tempo,” says Kekäläinen. “Restrictions during the pandemic and cancelled hobbies and events may have offered opportunities to spend more time on physical activity. For others, cancelled physical activities and less frequent going from one place to another may have caused a decrease in physical activity.”

The first study utilized data from 358 women. Women aged 51 to 59 were part of the Estrogen, Micro-RNAs and the Risk of Metabolic Dysfunction (EsmiRs) follow-up study. Self-reported data on health behaviors, depressive symptoms and personality traits were available from the pre-pandemic time. Participants reported health behaviors and changes in them and depressive symptoms at the onset (March 2020) and at the end (June 2020) of emergency conditions in Finland.

The second dataset consisted of 168 women and men around the age of 61 who participated in the latest data collection of the Jyväskylä Longitudinal Study of Personality and Social Development (JYLS) between April 2020 and April 2021. Participants reported physical activity and changes in it during the pandemic as part of a larger interview and personality was assessed by a self-reported questionnaire.

The publications have been created as part of the PATHWAY project funded by the Ministry of Education and Culture of Finland. The EsmiRs and JYLS (Trails project) studies are funded by the Academy of Finland.